Patrons will notice the “Place Hold” option has been removed for print items. This will last only while LION Libraries are closed for the COVID-19 pandemic. The reasons are two-fold: Our libraries aren’t able to share items with the public at the moment, and we don’t want to overwhelm our delivery service when we return to normal operations. Patrons will still be able to add items to their personal lists for future reference. 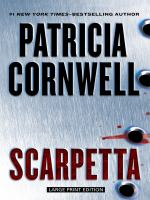 Description
A #1 New York Times Bestseller -- Leaving behind her private forensic pathology practice in Charleston, South Carolina, Kay Scarpetta accepts an assignment in New York City, where the NYPD has asked her to examine an injured man on Bellevue Hospital's psychiatric prison ward. The handcuffed and chained patient, Oscar Bane, has specifically asked for her, and when she literally has her gloved hands on him, he begins to talk -- and the story he has to tell turns out to be one of the most bizarre she has ever heard. The injuries, he says, were sustained in the course of a murder ...that he did not commit. Is Bane a criminally insane stalker who has fixed on Scarpetta? Or is his paranoid tale true, and it is he who is being spied on, followed and stalked by the actual killer? The one thing Scarpetta knows for certain is that a woman has been tortured and murdered -- and more violent deaths will follow. Gradually, an inexplicable and horrifying truth emerges: Whoever is committing the crimes knows where his prey is at all times. Is it a person, a government? And what is the connection between the victims?
Also in This Series

Note! Citation formats are based on standards as of July 2010. Citations contain only title, author, edition, publisher, and year published. Citations should be used as a guideline and should be double checked for accuracy.
Staff View
Grouped Work ID:
b3906a72-ca12-2d34-92ac-3a3139e95f1a
Go To GroupedWork